Sunday, May 16
You are at:Home»Opinions»Vote Positive; stay off the soccer field

In case you haven’t been paying attention to bumper stickers lately, there’s an election going on. You or someone you share dinnertime conversations with will be voting in it. With all the sepia-toned attack ads, speeches, and loud people with signs, the whole political landscape can become overwhelming, so I’ll try to explain things as I see them.

Politics is pretty much an under-12 AYSO soccer game. Think the Teal Tornadoes versus the Magenta Dragonflies at Cooper Park, and there are plenty of directions I could take this analogy. Both sides standing in a teal-and-magenta clump flailing at the ball without it going anywhere might sound an awful lot like Congress, for example. But, like anyone who knows under-12 AYSO soccer will tell you, the real problems come from the sidelines. 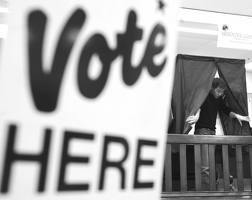 Picture a damp field of Gatorade-loaded 11-year-olds, trying their hardest to get one lick at the ball, and then picture their parents, decked out in teal or magenta, screaming at Lauren to cover the fast little red-haired kid who always scores on breakaways. Jeers from Dad on the sideline are distractions for those who want to play the game, they instigate fights, and they create a scenario where the players are less focused on playing fairly and more keen to slide-tackle the little red-haired kid. And in politics, where there’s much more at stake than plastic participation trophies, the problems multiply.

The issue boils down to team spirit, which itself is a double-edged sword. On one hand, cheering on a team brings fans together as a friendly community of people with a common interest and common color scheme. And in politics, where the winner is actually determined by the size of a team’s fanbase, community is king.
This kind of enthusiasm, though, has a darker side. Rooting for one team inherently means calling for the defeat of the other one. Just look at any political attack ad. Radio and TV shows use this tactic even more liberally (pun somewhat intended): Rush Limbaugh is obviously a conservative, but he rarely praises Republicans. Steven Colbert is obviously a liberal, but he rarely praises Democrats. Think about it.

The unfortunate truth is, it’s much easier to make a point with negativity. It’s easy, for example, to be against all taxes, because nobody likes taxes. It’s easy to point out that they’re an intrusion by the government into our lives, because they are. This stance on its own, though, is worthless because it doesn’t present a solution; where will the government get the money it needs to operate? Cutting spending? A slight tax increase? Yes, solving problems is harder than complaining about them, but if we’re going to keep the country moving, we’d better get used to it. It’s the difference between arguing with the ref about whether or not the foul was inside the penalty area, and instead cheering on the defense during the free kick (with cardboard D’s and white picket fence signs if necessary).

As voters, or even just as spectators during this election, we’ll never be able to completely ignore the negative. When we choose a candidate, though, it’s imperative that we don’t simply choose one because we disagree with the other. Every individual has their own unique viewpoint, and chances are, it won’t match any one party platform entirely. So go deeper than just the political party: choose based on what the candidates themselves stand for, and not what they stand against. Once you make your decision, sure, buy a bumper sticker and a sign for your lawn, but be respectful to the opinions of others. In other words, don’t be a crazy soccer mom.