Sunday, October 24
You are at:Home»News»Fire breaks out in Mountain View

At approximately 7:45 PM on Saturday, September 7th, a fire broke out at 1871 Orangetree Lane, Mountain View. The cause of the fire was uncertain, but it was believed to have been gas related. According to witnesses, there was some sort of explosion after the house caught fire. Firefighters arrived within minutes of the explosion, but the fire spread to at least three other houses before being contained by firefighters. Local police blocked off the street and told residents of Orangetree Lane and adjacent streets to evacuate their homes. Although two ambulances were called to the scene, no one was seriously injured, and the animals in the affected houses had been rescued by firefighters.

Dominic Librie, resident of Orangetree Lane and MVHS student was playing basketball in the street when he first noticed the fire.

“I figured it was a barbecue or something, but then I heard a giant pop, like a gunshot, and smoke started billowing up,” Librie said.

Alexander Stroud,  another MVHS student and neighbor helped evacuate residents from a house on Appletree Lane that was directly behind the original house that caught fire.

“A giant flame erupted through the entire roof of the house,” Stroud said.

Updates will be posted to mvhsoracle.com as more information is released. 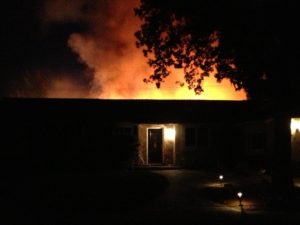