Friday, January 21
You are at:Home»Features»The Other End of Toms

Many people, including myself, tend to perceive large department stores as selfish corporations whose only goal is expansion and profit, even at the expense of the customer’s satisfaction.  Nordstroms and other well-known department stores, however, are changing this stereotype by making business while supporting a cause for the common good by selling Toms Shoes which is beneficial to both our nation and developing countries.

A non-profit organization whose mission statement is, “One for One,” Toms Shoes donates one pair of shoes to a child in need for every pair purchased.  Since its founding in 2006, Toms has evolved from a small business managed by two individuals to an internationally recognized organization who has given over ten million pairs of shoes to children in over sixty countries, including Nepal, Peru, United States, El Salvador, and Panama.

This past summer, I was able to spend six weeks living as a Panameñan in Cocle, Panama, where I learned about a very different culture and lived with a host family–eating their food, visiting church, and getting to know everyone in the community.  My experience was possible because of  Amigos de las Americas, a program which sends high school and college aged students from all over the United States to live in a Latin American country and work with local youth. 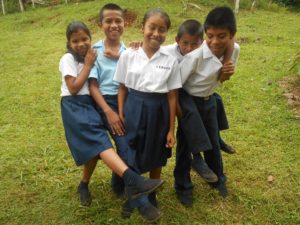 One of the last things I expected to encounter on my trip was Toms shoes. I was living in a relatively rural area in Palmar Abajo, a small community without electricity, with one store including one that offered necessities to everyone in the area (toiletries, rice, beans and the occasional duro (popsicle.)  In July, as I was walking my host sister, Lorena, across the river to school, I noticed her wearing a pair of the black canvas slip-ons commonly known as Toms.

At first, I thought that the shoes must just have been hand-me-downs, but after speaking with several teachers,  I realized that Toms had been donating sixty pairs of shoes a year to the schoolchildren in Palmar Abajo for the past two years. So when I found out that Toms Shoes happened to be getting delivered the next week, I made sure to stop by and see for myself.

And sure enough, one week later, a truck arrived bearing this year’s supply of sixty pairs of Toms. Watching all of  the schoolchildren smile and show off their brand new shoes was a sight that I will never forget. The style of Toms was also very practical for the children’s lifestyle–they’re composed of a thicker sole (for walking over hilly terrain) and are a color that conforms to the school dress code. Understanding the significance of receiving something so simple as a pair of shoes is difficult until you see the effect firsthand.

The role of Toms does not stop here. Every single day, Toms is reaching out to create more innovations and partnering with new agencies. As of Wednesday, September twenty fifth, Toms launched a five year investment in Haiti to support Haitian artisans and employees.

From now, as I walk through the Nordstrom’s shoe department, I will no longer look at Toms as a cute trend hitting the stores in our area, but instead as a social movement making  an impact on the world around us.