Sunday, October 24
You are at:Home»A&E»“It’s About Time:” Young the Giant hits Oakland

On May 3rd, 2013, Sameer Gadhia, the lead singer of Young the Giant, an indie-Alternative group from Irvine California, stated that the band would soon begin working on their long awaited second album. Young the Giant then announced their album-titled “Mind Over Matter” tour on November 18th of that same year. Singles “It’s About Time” and “Crystallized” came out in October and December, respectively, and the album was released on January 21st of 2014.

The “Mind Over Matter” tour began on February 4th, and their second stop was at the Fox Theater in Oakland, California on the 6th. Opening acts “Cayucas” and “Tapioca and the Flea” both had very distinct sounds. Tapioca and the Flea played a shorter set, whereas Cayucas, an indie-pop band from Santa Monica with warm harmonies, complex vocals, and semblances to Vampire Weekend, performed for a longer period of time.

Young the Giant kicked off their performance with the first song off “Mind Over Matter,” called “Slow Dive”  as the lights came up in the Fox Theater. After a few of their new songs, Gadhia told the audience that one of the band’s earlier performances had been at Bottom of the Hill, a small venue in San Francisco, and that in order to commemorate their past Bay Area concerts, they would be playing some old tunes. Fans could not contain their excitement and enthusiastically sang along to “Apartment,” “Strings,” “Cough Syrup,” “I Got,” and a few others. 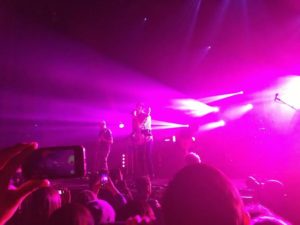 A number of songs were particularly amazing live. For example, “It’s About Time” was significantly better than the recorded version because the band’s energy fueled the performance. Although the set was great, most concert-goers were disappointed that the band did not play “Islands,” a slower, simpler, but beautiful song from their debut album. However, Young the Giant’s decision to end the show with one of their first hit singles, “My Body,” was brilliant—the entire audience danced and sang the chorus at the top of their lungs.

My body tells me no,

But I won’t quit, ‘cause I want more!

‘Cause I want more…

While fans were sad that the concert was over, it is safe to say that Oakland’s taste of the “Mind Over Matter Tour” ended on a good note.