Monday, March 1
You are at:Home»News»TEDx event hosted by MVHS

Mountain View High School hosted a TEDx event (an event affiliated with but independently organized from the nonprofit TED- Technology, Entertainment, and Design) for the first time this past Wednesday, January 6. MVHS junior, Owen Mountford, had the idea for TEDxMountainViewHighSchool and was involved in organizing the event along with other staff and student volunteers. This included Mrs. Madeline Miraglia who was the faculty advisor, the Commercial Art class who provided designs for the logo, PTSA and MVLA for funding, and the student planning committee of junior Ron Miasnik, senior Ria Rana, sophomore Cathy Zhang, and junior Owen Mountford. They hope to make it an annual event.

The goal of the day was to “bring students together to learn and to think different,” the theme being “Next Generation: What Will It Look Like?” which was specifically chosen for its relevance to our location in the Silicon Valley.

Auditions were held in October for speakers and were open to all MVHS students. In addition, several adult guest speakers were reached out to to give talks.

The event was attended by students and others in the local community, including friends and family of some speakers. The talks were filmed and the video will be put on Youtube in the next few weeks.

The first speaker of the day was junior Ron Miasnik, whose talk, “Combining Education and a Passion- a High Schooler’s Take,” focused around the idea that “education should not be the stepping stones in reaching our goals, but rather the vehicle with which we drive our passions.” He observed how many students get caught up in their academic success to the extent that they lose sight of the bigger picture and stray from potential passions.

Next, junior Shayla Tonge spoke of her passion for helping others in her talk titled, “Dream in a Drawer.” She communicated that “radical dreams are possible,” and to truly discover this, one should “allow themselves to have the audacity to pursue a passion.” She herself came to realize this after a 5-month service trip with her family around the world this past year.

Guest speaker Tom Gruber used statistics and photos to explain how our world’s ocean is in danger and it is up to our generation to save it, in his talk, “The Generation that will Save the Ocean.” He prompted the audience with advice for what we can do to save our waters from their peril.

In senior Darren Dawson’s talk, “Projection,” he spoke of how although teleportation is not something likely to be successful in the near future, projection, or the concept of projecting something else, somewhere else, most definitely is. It has been used on a smaller scale in, for example, movie theaters, but the concept itself has the potential to “manipulate our world” and aid us greatly in research, such as on Mars.

Guest speaker Rachel Powers gave her talk, “Reimagining Design Languages,” where she shared her insight on the power of design in terms of impacting consumers’ lives due to being designed in “purposeful and meaningful ways.” She additionally addressed how every aspect of a product has the capacity to be “brought together in one experience… [so]emotion [is]produced out of a material thing.”

Junior Jacqueline Conn named her talk after a poem she wrote, “Dear Girl in the Mirror,” which she recited at the start of her talk. The poem was about what she has gone through in the past 16 years of her life, ultimately communicating that “every girl is beautiful, and nothing should make her feel different.”

Senior John Dizon shared with the audience his thoughts regarding technology and its affect on us in his talk titled, “The Inverse Relationship between Time Online and the Depths of Your Relationships.” He explained how although it is a wonderful thing, at the same time it is taking away from our relationships with one another. Or as he put it, “We are losing the social aspect of social media…when we are vulnerable we can show the world our true selves, not the perfect selves we market [online].”

Guest speaker Steve Omohundro then gave his talk, “How will Artificial Intelligence Change Our Lives?” on how artificial intelligence is truly a “massive economic force coming into the world,” and work being done in this field has great potential and can bring about significant change for the world.

Senior Rohit Padmakumar gave his talk, “Balancing the Educational System,” on the benefits online education can bring to society, specifically because “the world is evolving more quickly than traditional education is providing.” He also addressed the issue of how “Talent is everywhere, [but]opportunity is not,” which online education resolves.

Next, sophomore Andrea Halsted gave her talk, “Segregation at Mountain View High School,” in which she explained to the audience her observations regarding the segregation at both MVHS and Woodside High School, where she transferred from. In her talk she spoke of issues such as stereotypes, racial separation on campus, the benefits of diversity, and how it “does not serve anyone to be in a bubble.”

Amy Critchett, the founder and CEO of “Art+Audience,” shared her insight in her talk, “Expect Art,” on the power of art, specifically public art, based on her love for it since she was a young child and her experience in creating the “Bay Lights.”

Senior Marawan Nassar began his talk, “(Insert Label Here),” by coming on stage playing the ukelele and then proceeding with his insight on the topic of labeling people. He explained that “as humans we can only do so much,” and this is because of the “limits put upon us [through labels].” As for solving the issue, this is a difficult thing to do because of the “mental satisfaction [we get from]thinking we have an understanding of the people around us,” but we can at least try to “[be]conscious of [our]thoughts.”

In guest speaker Sonia Baltodano’s talk, “When My Car Loves Me,” she spoke to the audience regarding the design of emotionally responsive vehicles, to bring about a “a future where you can not only show your love for the car, but have the car pick up on this” via engine roars, vibrations, shoulder nudges, and much more– all of which to ultimately create meaningful interactions between one and their car.

Senior Shubba Chakravarty gave the final talk of the day, titled, “Generation Fusion,” which was based upon her experience as a bicultural individual, her family being from India and having lived her life here in America. She sees it as being a part of “both and neither” cultures, yet asking herself “Where do I belong?” She clarified that this isn’t the same as confusion; she describes it as “hav[ing]adapted to and mak[ing]the best of a situation thrown at [her].”

The event gave speakers a chance to go outside their comfort zones.

“It was absolutely terrifying standing up on stage in front of so many people. However, it was totally worth it because I got to share my idea and learn from other individuals,” Jacqueline Conn said.

The speakers put both time and effort into their talks, hoping to communicate their ideas and passions to the audience.

“I thought it was incredible that students were given and trusted with this experience…one of the coolest parts of the experience, and about TED, in general, is that it’s one of those outstanding instances where you’re really there only to learn, grow, and think. No outside agenda,” Ron Miasnik said.

Junior Leah Lam was one of the event’s attendees and enjoyed her experience.

“My experience at TEDxMVHS [was]engaging because I was able to listen to various nuanced perspectives that connected and contrasted over relevant topics and issues,” Leah Lam said.

Throughout the talks, volunteer Eileen Clegg created visual representations of each of the talks given, shown in the pictures below.

In addition to the aforementioned talks, previously published (via Youtube) TED Talks relevant to the “Next Generation” theme were played for the audience. You can find them by clicking on the names of their speakers listed below.

Adora Svitak “What Adults Can Learn from Kids”

Dan Ariely “How Equal do We Want the World to be?  You’d be Surprised” 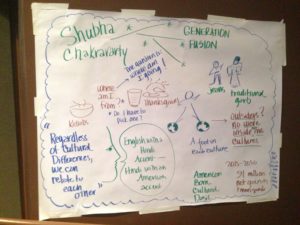 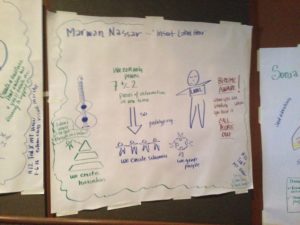 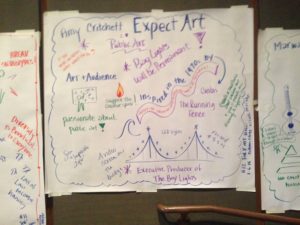 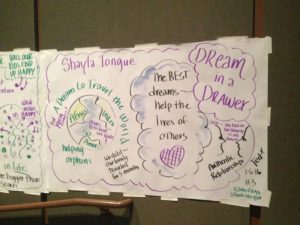 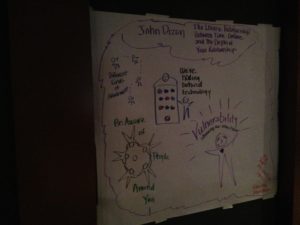 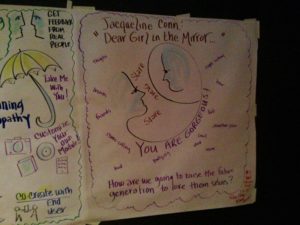 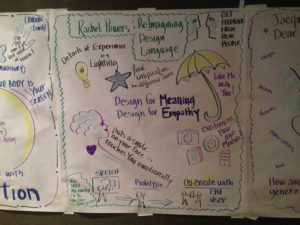 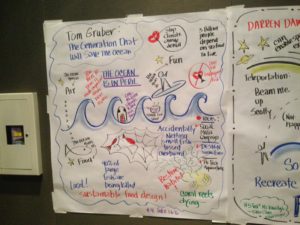 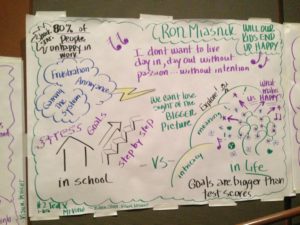 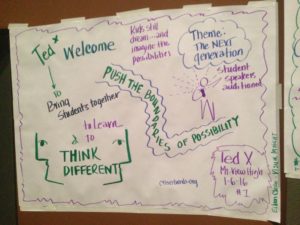