Sunday, October 24
You are at:Home»News»Fire Alarm set off during lunch, not a drill

The fire alarm set off on Feb 4 at the end of lunch around 12pm was due to a malfunction of an inverter in the electrical room between the 600 wing classrooms and the back parking lot. 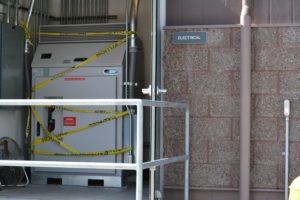 This inverter converts the solar power acquired by the solar panels over the back parking lot and classroom roofs into usable energy. When it began smoking during lunch on Thursday, it set off a fire alarm, alerting the local fire department who arrived, investigated, shut off the inverter, and declared the situation stable within 30 minutes. 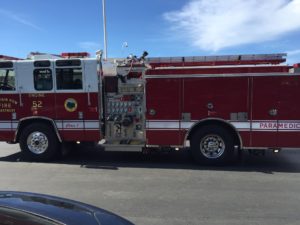 The ladder seen by some students was used by the Mountain View Fire Department to check the roof in order to ensure that the scene was completely safe.

The reason for the malfunction is still unknown, but Cupertino Electric, the company which had originally installed the inverter, will be examining the machine further in the next few days.

“There are a series of reasons why [this could have happened],” Grissom said. “That has not yet been determined.”

As of Feb 5, the inverter remains turned off until more details surfaces.

This article has been updated to correct an error in the previous post. The actual time of the fire drill was 12pm, not 12:55pm as previously stated.