Administration put history teacher Frank Navarro on paid administrative leave on Thursday, Nov. 10. Originally, according to Navarro, he was supposed to return on Wednesday, Nov 16. However, at around 5 p.m. on Sunday, Nov. 13, Superintendent Jeff Harding informed Navarro that he would be returning to school on Monday.

While Navarro originally said that his leave was due to comparisons between Adolf Hitler and President-elect Donald Trump, Harding later said that Navarro’s paid leave was for a different reason which he is not at liberty to disclose.

“The administrators involved were responding to a specific parent and student complaint of a serious nature,” Harding said in an email to the Oracle on Nov. 13. “It is our duty to investigate such a complaint to ensure the emotional safety of all of our students.”

According to Harding, Navarro was absent during the investigation of the complaint, but will now be reinstated as administration is now “confident that the environment [is]safe for students.”

However, Navarro still maintains that he was told that he was put on paid administrative leave for his comments on Trump and Hitler.

“The assistant superintendent said from the email [from the parent]that…I called Trump Hitler,” Navarro said. “I am mystified [by Harding’s reasons]because those were the only comments made.”

In an interview with CBS SF Bay Area, Navarro said that looking back, he doesn’t regret his actions.

“I would do it again, absolutely. I think it’s a heated time; I think we are polarized and that we have forgotten what it means to exchange ideas.”

“Words cannot begin to express my gratitude and love in my heart that has come from the outpouring of responses from community, students, parents, former students,” Navarro said. “I am moved and deeply appreciative. I cannot thank everybody enough.” 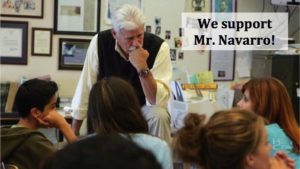 Previously the headline claimed that allegations were proved false. However, according to Superintendent Jeff Harding, the environment was determined safe for students, and the original headline was inaccurate.