By Kaitlyn Ecklund and Reeya Vasishta

For the past five years, the Junior Varsity girls’ soccer coach, Kent Fogleman, has battled skin cancer. Last December, he was rediagnosed with melanoma, a form of skin cancer. On Jan. 12, he had surgery to have the melanomas removed from his head and to have a skin graft, which involves taking skin from another part of the body to help replace the tissue they are removing. The procedure took eight hours but was successful, and Coach Kent is now in recovery.

His team wore hats to their first league game on Thursday to show their support for their coach and to advocate for taking care of your skin as well as the prevention of skin cancer.

“Even though it was rainy and foggy, we decided that, to show support and raise awareness, that we would wear hats,” said sophomore team captain Morgan Lunn. “So we took a picture at our game with us all wearing our hats and sent that to him and I think that made his day.”

From this experience, the team now understands the harmful, and even deadly, results of not wearing sunscreen or hats to protect their skin, as Coach Kent pointed out in an email to the team.

“One has to think that all of the time spent outdoors in my youth, teens, and early 20’s when sunscreen did not exist or was a very low SPF is a contributing factor,” Coach Kent wrote.

The email made many team members realize their lack of awareness.

“Anybody is prone to it, especially the way that he got it,” said junior team captain Mallory Coish. “I usually don’t [wear sunscreen]. It’s scary and I was really concerned for him.”

Despite being rediagnosed this past December with melanoma, Coach Kent remains upbeat and optimistic. The team has been brought closer together, and eagerly awaits Kent’s return to the field, said Coish and Lunn.

“[Kent] always talks about how he’ll be back, even though he should take as much time as he wants. I know that he really wants to be here,” Coish said. “He definitely loves his team and being a coach.” 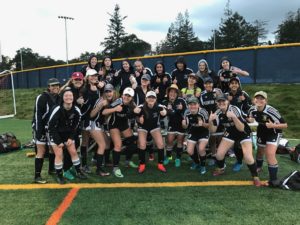