Saturday, October 16
You are at:Home»Features»MVHS Science Olympiad team starts off 2017 in record fashion

The MVHS Science Olympiad team began their 2017 season on a high note at the Mira Loma invitational on Saturday, Jan. 7. They finished second, their highest finish ever at this tournament, topping their third place finish 2016. The team had been prepping for months for this “Best of the West” tournament.

“Overall it was a challenging invitational where we were matched against the 2016 and 2015 national champions. We managed to beat last year’s champion and took second,” said Science Olympiad team member and junior Howard Wang.
They beat Mira Loma high school, the 2016 Science Olympiad Champions and hosts of the tournament.

“We started studying during [the]summer, which is about as early as you can get,” said junior and Science Olympiad team captain Connery Wood. “We’ve all been working a lot harder.”

In addition to preparing early, the team recruited graduate students from nearby universities, such as Stanford, to help with studying and preparation for tournaments.

“They help us study beforehand, but when you’re in the event, only the [MVHS] students are the ones participating,” Wood said.

Although the team said they were happy with their strong showing at Mira Loma, they are continuously looking to improve. Their goal is to place in the top four at regionals to go to the state competition, and place first in the state to get to nationals.

In order to achieve their goal of going to nationals, they will continue studying and working to improve their weak spots.

“There are four events that I remember we didn’t do as well in: astronomy, anatomy and physiology, disease detectives, and chemistry lab,” Wood said. “The only thing we can do to resolve that is basically go over the test, look at what we got wrong, and figure out how to improve.”

As the team leader, Wood has also been working with his teammates and understanding their strengths and weaknesses to ensure the best possible results from his team.

“We’ve been trying a lot harder to get everyone the events that they want to ensure that everyone is happy with what they have so that they’ll work harder,” he said.

The team has two three-hour meetings each week to meet with the graduate students, their mentors, and study. After that, they get assigned homework from their mentors, in addition to cramming in studying before tournaments. This, combined with their school work, makes Science Olympiad a big commitment.

“The best part about Science Olympiad is that your results reflect the amount of time you commit. Each year, we have steadily improved because of the increasing amount of dedication members show,” said senior Amanda Koong, the Science Olympiad treasurer.

As regionals loom closer, the Science Olympiad team will continue to work vigorously until the day of the Santa Clara regional tournament on March 18.

“The goal is definitely to get to nationals,” Wood said. “Will we get it? It’s up in the air, but we are definitely hopeful this year.” 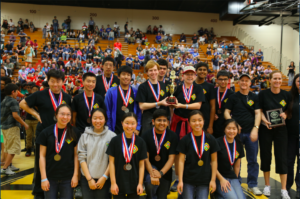