Friday, January 21
You are at:Home»A&E»Freestyle students showcase their talents at Mid-Year Exhibition

Freestyle Academy held their Mid-Year Exhibition of students’ Narrative Projects at the Computer History Museum on Friday night. Students from Freestyle, which is made up of both MVHS and LAHS students, animated, drew, photographed, filmed, and wrote the projects that were displayed.
Each student started by creating a story in English class. Then, in their Film or Digital Media class, they turned their stories into short films, animations, photographs, and other artistic pieces. 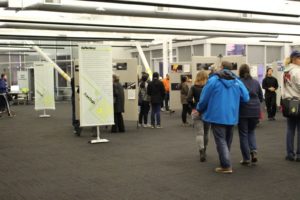 In one room, there were all of the exhibitions that students had created. 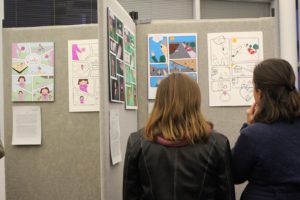 Then, there were 39 selected short films, trailers, and other videos shown in the main theater. 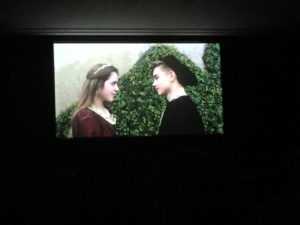 “I didn’t want to do something boring and do something out of the box and something bordering the line of okay versus what’s not, so I chose cigarettes and whiskey…It was in a tiny wood box that was dark, so I had to move a spotlight around and get different shadows and one of them was that one.” 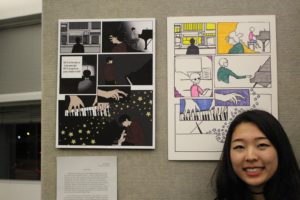 “It is showing the work that we have done this semester, both juniors and seniors. [The juniors] made graphic novels and comics basically trying to understand the tools. [The seniors] have a lot of photography and surrealism projects…Because I just quit piano, I wrote a story about someone who wants to play piano.” 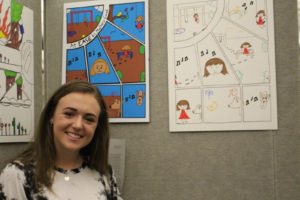 “My piece is the rising action of a comic and it took a lot of work. I first drew it then animated it. It is a story about a girl and a dog who hear a bird’s singing.” 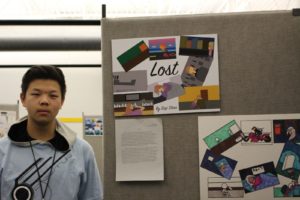 “My artwork, ‘Lost’, is a story about a little girl that suffers a divorce, meaning that her parents split up. While she is looking for her father, her mother passes away and that tragedy really allows her to reconnect with her father.”

Websites:
“Students in digital media create lots of different kinds of media and one of them is websites because the web is a huge part of teenagers’ lives. We teach them how to make websites…The seniors, they write their short stories on their website. They even make it a little audio book, so when we say go tell a story don’t just tell it in words, but tell it through audio, tell it through trailers, through videos, animations so they’re telling the story in all different ways,” said Leo Florendo, Freestyle Academy Program Coordinator. 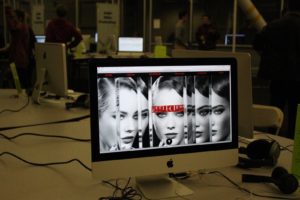 Videos:
“In those mini theaters, are basically all the video productions that all the students made. So these are junior rooms and senior rooms and it’s a lot there. From short little haiku videos to full on one to two minute animations to a six to seven minute narrative story. Some of them are book trailers and some of them are personal essays,” Florendo said. 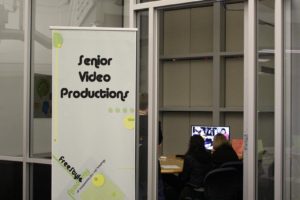