Friday, January 21
You are at:Home»News»Freshmen host Table of Solidarity in response to racial slurs used on campus

In response to their classmates’ recurrent use of racial slurs, namely the N-word, five freshman girls plan to distribute blue ribbons to students to sport as a symbol of solidarity. The five are slated to host a “Table of Solidarity” Friday, May 19, in the main quad during lunch, where students may receive blue ribbons to demonstrate their support for the anti-slur campaign.

Working with Rogers, the girls planned the table and designed anti-discrimination posters that can be seen around campus. The campaign for unity was spurred by multiple instances the girls have observed in which students have used racials slurs toward them and others.

“There’s been specific things where we’ve just been in class in casual conversations and someone will just say the N-word, or call hispanic people the B-word,” Philyaw said. “A lot of people don’t say anything back. It just makes you feel uncomfortable and not really cared about.” 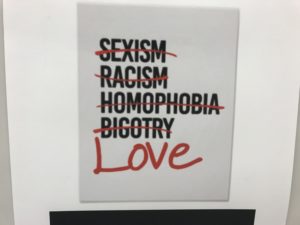 The use of racial slurs that the girls have witnessed extends beyond campus, existing on social media platforms as well. In one particular incident that provoked the girls’ action, Philyaw said she saw a post of a friend using the N-word, and found dialogue to be unproductive in explaining to her friend why she felt the use of the word was harmful.

“I basically tried to educate her on why that’s not okay and why you shouldn’t say that, how it makes me feel unsafe specifically as well, and how while she might see it as funny, other people see it as hurtful,” Philyaw said. “Then she used the word against me, and we decided that that was it, and we were basically over people saying things like that and we wanted to make sure that no one else does on campus.”

While the incident was reported and the student eventually apologized, Cervantes said the student “went back and said ‘I wasn’t actually sorry, I was just trying to be nice,’ then continued to use racial slurs toward other students on social media.

“They were punished, but they’re still active on campus. They still, I feel like, have those same views,” Philyaw said. “Nothing has really changed with their mindset and how they think.”

The girls emphasized that they do not want the focus of their campaign to be on any one incident or individual but instead said that they hope to spread a broader message of unity.

In spreading a message of unity, the five girls said they hope to strengthen community ties by offering ribbons to all members of the student body who wish to receive them, regardless of their viewpoints. They want the event to serve as an opportunity for education and dialogue.

“We want to make this a way for people who don’t support the solidarity thing we’re trying to do, but who are willing to learn, for us to teach them and for them to teach us and build on what we already have as a community, and strengthen that to more of a family,” Alvarez said.

For now, to support what Philyaw refers to as “strength and unity and how we’re much better together  than being separated,” students can pick up a ribbon in the quad. In the future, the girls plan to continue their campaign by releasing a video featuring people with different backgrounds sharing their experiences with prejudice, and said administrators may be involved in future efforts to spread their message of unity.

“Whether you’re democratic, liberal, conservative, or republican, we can all find a middle ground of respect,” Somera said.