On the Thursday before Prom, Administration held an assembly for juniors and seniors in which guest speaker Anea Bogue presented on affirmative consent and sexual assault prevention.

The assembly was organized by Assistant Principal William Blair, who had been planning for Bogue to present to the student body since early March.

“Los Altos [High School] had Anea come in, and when I went to watch it I thought it was really good and wanted to bring it to MVHS too,” Blair said. “Originally, we wanted to do it with the whole school, but for scheduling reasons we found it most important to get the presentation to the juniors and seniors first.”

According to Blair, Administration has already organized for upcoming freshmen, sophomores, and juniors to attend the same assembly in the fall of 2017.

“The reason why I personally wanted this assembly was because when talking about affirmative consent, it specifically refers to sexuality and human relationships, but it is also [about]positive communication skills,” Blair said.

Blair and the administration found it timely to hold the assembly prior to prom to emphasize the importance of affirmative consent when it comes to dancing and post-prom interactions.

Bogue stated the importance of presenting students with information on affirmative consent and sexual assault prevention in high school, rather than waiting until students are in post-graduate age.

“The fact is, in terms of our development as human beings, our sexual identity and code of conduct is really formed in high school,” Bogue said. “High school is where we tend to start to interact sexually, so getting this information now while students are forming their habits and their way of being is really crucial.”

Bogue believes that students should be aware of what could happen, especially at prom and other social events.

“Prom, for better or worse, usually includes alcohol and/or drugs,” Bogue said. “And people having the opportunity to be away from their parents and able to act on their urges, which is a natural part of being human at this age.”

Blair agrees, and hopes the assembly will help to shift the culture at MVHS.

“We’re trying to shift to affirmative consent rather than passive consent,” Blair said. “I think if you’re asking somebody to do something you should verbally ask. It’s as simple as that.” 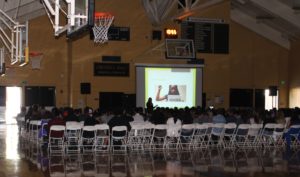 Samir is a senior is this is his third year in Oracle. He is the Sports editor this year. In his free time, Samir enjoys playing sports, traveling, and taking photos.