Friday, January 21
You are at:Home»Features»Mountain View reacts to solar eclipse

Thanks to a donation of glasses by the MVLA foundation, students were able to look up and view the 70% visible solar eclipse on Monday, August 21. Students were given 35 minutes to view the eclipse from campus. 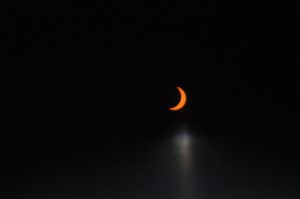 Partial eclipse in Mountain View through the sunglass filter

Junior Olivia Cobb said she appreciated the viewing period that the school allotted between brunch and third period.

“I think the eclipse is really cool especially because it’s a rare occurrence and I’m glad that our school provided the glasses for us to be able to watch it safely,” Cobb said. 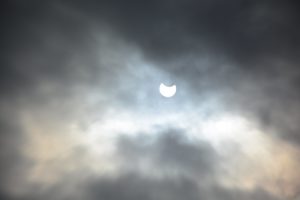 The reflection of the eclipse

Senior Grace Flinchum, among other students, travelled to Oregon to witness the eclipse in its totality. Her family had been planning the excursion to Oregon for a year before finally driving up north to see historical viewing of the eclipse, along with an estimated 1 million other travellers.

“There’s a 360 degree sunset because everywhere outside the path of totality is still bright so everyone was cheering,” Flinchum said.

“Some people were crying. We just found it really cool.”

Freshman Brandon Freiberg saw the eclipse from Carbondale, Illinois where the solar eclipse had the greatest totality and the longest duration, about 2 minutes and 37 seconds. 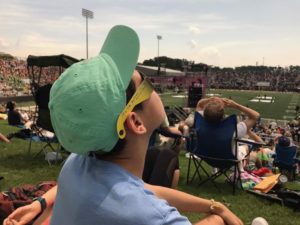 Freshman Brandon Frieberg looks up at the eclipse in Illinois

“It was definitely worth it for me it was so cool, and it’ll happen again in 2024 which is when I’ll be a junior in college,” Freiberg said. “It’s a super special event and I’ve never seen it before, but I’ve always seen pictures online and in real life it surpassed my expectations.”

While Freiberg and Flinchum were able to travel to see the eclipse in its path of totality, others were excited just to witness the 70% visibility.

“My dad was so excited about this eclipse that he stayed home to view it,” said senior Carolyn Moor. “He’s been talking about it for about two months and he purchased large binoculars for deep sky watching.”

While a solar eclipse may occur every 18 months, the moon’s shadow is not always in line with the Earth’s tilt, so the moon often passes below or above the Earth and is not visible. The next total solar eclipse that will be viewable from the continental U.S. will be in April 2024.

An earlier version of this article incorrectly stated that the donation of glasses came from Google, not the MVLA foundation.