In response to an updated travel warning against additional Mexican states last week, the choir department announced last Thursday that they were changing the location of the advanced, all-girls A Capella choir’s winter break tour from Mexico to Costa Rica. Among other states, the travel warning issued by the U.S. State Department listed Quintana Roo, which includes areas such as Cancun, Cozumel, Playa del Carmen, Riviera Maya, and Tulum.

“These are all areas we were planning on traveling to during our tour.  Because student safety is always first we have decided that this is a risk we are not willing to take,” choir teacher Jill Denny said in an email.

I was kind of worried [that the trip was cancelled]

Citing Mexican government statistics, the State Department said that Quintana Roo and other Mexican states experienced an increase in homicide and violent crime rates compared to 2016.

“While most of these homicides appeared to be targeted criminal organization assassinations, turf battles between criminal groups have resulted in violent crime in areas frequented by U.S. citizens. Shooting incidents, in which innocent bystanders have been injured or killed, have occurred,” the State Department said in the travel warning.

Mexico had been the planned travel destination since Feb. 2016, since the choir department plans these trips over a year in advance.

“Two nights ago, we got a text saying, ‘Come to the choir room. It’s super important’, and then I found out that we were the only choir that got the text, so I was kind of worried [that the trip was cancelled],” sophomore Julia Aguiar of A Capella choir said, recounting the events. 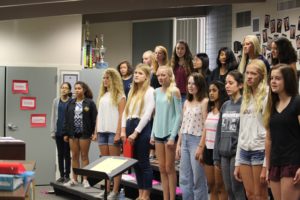 A capella choir students rehearse during their fourth period class.

When she went to the classroom, Denny told that class that they were not going to Mexico because of organized crime activity in all of the places they intended to visit, according to Aguiar.

“So that’s when they decided to go to Costa Rica, because the cost would be the same, and the language is the same and all the learning opportunities are the same,” Aguiar said. “I was kind of disappointed because I was looking forward to Mexico, but I think Costa Rica is going to be really cool.”

During the tour, the choir plans to perform community service, teach Costa Ricans songs and sing for many people who, in some cases, “aren’t quite as privileged as we are,” according to Aguiar.

“It’s mostly to really spread the world that everyone deserves to be heard and have a voice, because or motto is ‘every voice counts,’” Aguiar said.

“Although I LOVE Mexico, its people, and its culture we have to follow government recommendations. I have taken a choir to Costa Rica before and found the people extremely welcoming, the music [sic]outstanding, and the outreach opportunities abound,” Denny said.

Denny also said that the travel costs and dates of travel will be the same for the now-Costa Rica trip.

Nisha, a senior in her third year of Oracle, is the Editor-in-Chief. She enjoys producing music, reading and sleeping in her nonexistent free time. In the future, Nisha would like to be an underpaid journalist struggling to pay rent in New York and start a small business.