After a heartbreaking end to a strong 2016 season when MVHS lost to Saint Francis in the CCS playoffs, the MVHS football team says they hope to improve on last year’s success after changing divisions.

“We want to follow up on last year, and getting back into the CCS playoffs is the number-one goal,” varsity football head coach Shelley Smith said. “We have a different path there this year, as we’re in a different league, so I think we have some opportunities.”

Last season, the Spartans competed in the De Anza League, a league that Smith describes as one of the most difficult public-school leagues in the area. This season, MVHS will be competing in the El Camino League — a division lower than De Anza — against Santa Clara, Gunn, Cupertino, Monta Vista, Fremont, and Lynbrook. 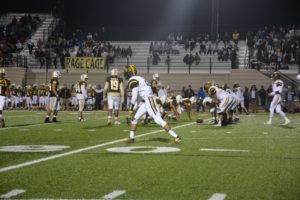 “I think our goal this season is just to win each week. Each week is a new opponent and we just want to win, win, win. If we can do that, it will lead to CCS playoffs and eventually a championship,” co-captain Sami Katwan said.

The team has been putting in additional effort outside of practice as they work toward their goal by weightlifting and swimming in zero period to stay in shape.

The Spartan offense is characterized by their ability to run the ball. Juniors Danny Olsen and Ethan Starr are the starting [infopopup tag=runningback] and [infopopup tag=fullback], respectively. The team has averaged 160.3 rushing yards per game and a respectable 4.3 yards per carry, scoring all eight of their touchdowns this season off running plays.

Spearheading their strong running game is their powerful offensive line. On the left side are three-year starters Una Kaufusi, a co-captain, and Michael Capote. On the right are Victor Baird and James Doherty. Co-captain Alphonso Barmore plays [infopopup tag=center].

“Our offensive line will carry us as far as they can take us. They’ve played really well this season,” Smith said.

The team also views the blend of new and returning players as a key strength for the upcoming season.

MVHS varsity football team huddles before their next play

“Our biggest strength this year is that we have a lot of young guys. They’re very energetic and ready to learn, but we also have a lot of returning players so they can take the younger players under their wing and teach them,” Kaufusi said.

However, the beginning of the season has been plagued with injuries.

In their first game, the Spartans lost starting running back and co-captain Sam Gil to a slightly fractured collarbone, two fractured ribs, and a punctured and partially collapsed lung.

“It was kind of a freakish injury, something you don’t see very often, but he’s bound and determined to be back so we’re hoping that we get him back, hopefully by Homecoming,” Smith said, referring to the upcoming Oct. 6 game against Cupertino. “He’s a pretty strong-willed kid and he’ll overcome it.”

Junior running back, [infopopup tag=linebacker], and [infopopup tag=nosetackle] Josue Ibarra was injured in the second game of the season with a broken tibia and fibula, according to Smith.

Despite these injuries, the team has managed to remain positive.

“It’s just ‘next-man-up’ for these situations. We bring people up from JV and our veteran players step up to fill those roles,” co-captain Will Kenyon said.

Barmore echoes that the team will not stop due to these injuries.

“No matter who the opponent is or what the situation is, we’re going to keep going 100% harder each time,” Barmore said.

The team’s first league game will be away against Fremont High School on Sept. 22.