Friday, January 21
You are at:Home»Sports»Fall Sports»MVHS vs. Cupertino homecoming game: keys to victory

The MVHS Spartans (2-3) will take on the Cupertino High School Pioneers (3-2) at home in the Spartans’ homecoming game on Friday, Oct. 6, at 7 p.m. With both teams hungry for a win at the beginning of their seasons, they have different focuses to help them find success. 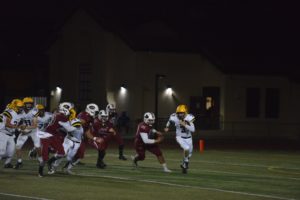 The Spartans lost 58-41 to Fremont High School in their first league game on Sept. 22.

The Spartans’ rushing offense is led by junior Danny Olsen, whose 215 rushing yards rank him fourth in the El Camino League; senior Michael Capote, who has run for 166 yards and two touchdowns in his past two games; senior Sam Gil, who has had 238 total yards and two touchdowns in the past two games; and junior quarterback JD Coyne, whose six rushing touchdowns this season rank third in the league. When the Spartans can run the ball effectively, they are a force to be reckoned with.

Mistakes have plagued the Spartan offense and defense all season long. The Spartans turned the ball over four times in each of their losses to Carlmont and Fremont. Quarterback JD Coyne threw two interceptions in each and Ethan Starr, Elijah Brown, Danny Olsen, and Sam Gil all had one fumble.

Our biggest challenge this game will be limiting our mistakes. We need to have better ball security and we need to limit our mistakes on defense

On one of the first plays of Fremont game, a short passing play by Fremont ended in a 71-yard touchdown after a slew of missed tackles and inadequate coverage from the Spartan defense. In the same game, a Mountain View wide receiver dropped a likely touchdown pass on the goal line as the first half drew to a close with the Spartans trailing by three points.

According to Mountain View head coach Shelley Smith, limiting mistakes like these during the homecoming game will be crucial for a victory.

“Our biggest challenge this game will be limiting our mistakes. We need to have better ball security and we need to limit our mistakes on defense,” Smith said.

The crowd noise produced by Mountain View fans could play a major role in this game. “The crowd makes a big difference for our guys. The louder and the crazier it gets helps a lot. Having our Sixth Man and our pep band really help. We have a great cheer organization going at our school. When you put all that together, it’s pretty crazy. You gotta be excited for that,” Smith said. Spartan fans showing their support may be a deciding factor in driving the team to victory.

Like the Spartans, the Pioneer running game is one of the strongest in the El Camino League. Their offense islead by senior running back and captain Alex Bruckhaus, who leads the league in rushing yards and ranks second in touchdowns. The Spartans defense has allowed over 100 yards rushing in three of their games this year, leading to a favorable matchup for Cupertino. If Bruckhaus can get going early, the Pioneers will be hard to stop. 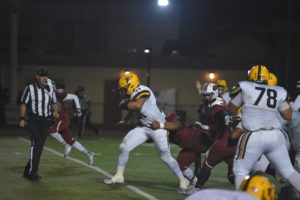 Although Mountain View quarterback JD Coyne has improved dramatically over the course of the season, he continues to show his inexperience with six turnovers this season. Putting pressure on Coyne early will be crucial for Cupertino. Senior middle linebacker Matthew Kimball is the leading tackler in the league with 46 tackles. Along with senior defensive end Richard Chan, who is tied for fourth in sacks, the pair will need to put the pressure on Coyne early.

It’s no secret that the Spartans are pretty banged up. Even with the return of injured running back Sam Gil, they are still without senior cornerback and captain Will Kenyon and junior fullback Josue Ibarra. Some players, like senior Michael Capote, are even playing out of position to fill the empty holes on the field. Meanwhile, the Pioneers have a healthy roster that was already very strong.

If we want to do well for the rest of the season, this is going to be a big game for us

“This is probably the best Cupertino team we’ve seen in ten years. They’ve got probably four or five De Anza-quality athletes on an El Camino [League] team, which makes a huge difference, and they also appear to be healthy right now. If we want to do well for the rest of the season, this is going to be a big game for us,” Smith said.

It is likely that the Cupertino coaches will take advantage of these weaknesses on the Spartans’ team, as Smith noted how much respect he has for the Pioneers’ coaching staff.