Friday, January 21
You are at:Home»Sports»Fall Sports»Spartans fall to Cupertino 28-21 in three overtimes in homecoming game

A feeling of disappointment lingered over the MVHS stadium Friday night as the Spartans lost the homecoming game to the Cupertino High School Pioneers 28-21 in three overtimes, casting serious doubt on their playoff chances.

Despite the disappointing loss for the Spartans, the hard-fought game excited the crowd that filled the MVHS stadium.

“I think it was really just two good football teams that believe in old-school, hard-nosed football,” Oswald said. “We were evenly matched and the kids played their hearts out.”

The close-fought game ended in defeat for the Spartans largely due to an abundance of errors, a recurring problem this season.

Although, for just the second time this season, the Spartans committed no turnovers in the first four quarters, turnovers in overtime were crucial in deciding the outcome of the game. Junior running back Danny Olsen threw an interception on an attempted trick play and senior fullback Michael Capote committed a fumble that ended the game when it was recovered by Cupertino. 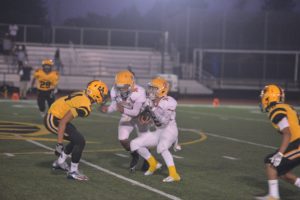 Among the bright spots for the Spartans was agile junior running back Jacob Cortinas whose explosive plays on both special teams and offense were critical to the team’s offensive efforts, despite totaling only 37 rushing yards. Senior running back and captain Sam Gil also ran for two touchdowns. However, the Spartan offense failed to reliably produce meaningful drives—their usually dependable rushing game averaged just 3.8 yards per carry.

The Spartan defense gave a strong performance as well, holding the powerful Pioneer offense to just 14 points through regulation time.

After the game, head coach Shelley Smith was visibly unhappy with the turnout of the game.

“Sometimes I think the other team just wanted it more than we did. We got it to three overtimes, but it just didn’t go our way,” Smith said.

However, Smith did provide words of encouragement for his team, expressing hope that the Spartans can turn things around.

“We’ve got four games to go and we’ll see what we can do. Anything can happen. We just can’t give up,” Smith said.