Sunday, May 16
You are at:Home»Features»Dasha Nakhabtseva: Looking Back on 15 Years in Russia

Three years ago, at the age of 15, senior Dasha Nakhabtseva decided to move alone from St. Petersburg, Russia to the United States for better educational and career opportunities. She lives here independently, her family still in Russia, and currently works six hours a day to pay for an apartment in Mountain View and other living necessities.

Growing up in Russia, Nakhabtseva remembers watching television propaganda on Channel 9, state-run programming that regularly ran news reports on how “horrible” the U.S. is. Nakhabtseva said the message that Russia propaganda promotes about the U.S. is clear: Americans are fat, dumb, and evil.

Nakhabtseva said the channel recently used images of hurricanes and other natural disasters in America to portray the U.S. as a place with terrible living conditions and promote Russia as great in comparison to the U.S.

Anti-American rhetoric is widely supported in Russia, she said, as Russian propaganda promotes Russia as “trying to take over the world.”

“Russia absolutely hates America,” Nakhabtseva said. “Putin is completely, I would say, a crazy person who is trying to brainwash the entire Russian population.” 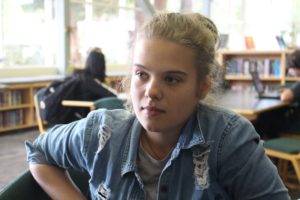 According to PEW Research Center 87% of Russians have some or a lot of confidence in the way Putin handles global issues. This number had remained relatively constant since the outbreak in Ukraine in 2014.

“They think that Putin is God,” Nakhabtseva said. “Putin is God who is going to save this country from failing.”

In addition, she said most Russian citizens don’t care about negative American perceptions of their country — they’re aware of it, but they think that the U.S.  and Russia should hate each other.

Perhaps an effect of American depictions of Russia in the media, Nakhabtseva said Americans tend to generalize Russians as dangerous. When people are surprised to learn of her Russian heritage, she finds the situation humorous.

“When I say that I am Russian … you feel this change in perspective,” Nakhabtseva said.

When Nakhabtseva initially moved to the U.S., she didn’t feel a culture shock; however, after three years Nakhabtseva realized that the two countries are culturally very different. In fact, Nakhabtseva said she could probably never have a close relationship with a person who holds mainstream American values — they’re just too different. 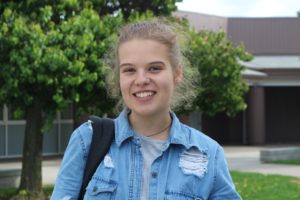 One thing Nakhabtseva said she misses from Russia is the blunt honesty.

“They’re smiling at me, but they really don’t care what I’m saying,” said Nakhabtseva. “Something is wrong. In Russia, it doesn’t happen.”

While Nakhabtseva doesn’t appreciate the socially accepted subtext and fakeness of conversations here, she said she does feel more “accepted” in terms of her body weight.

“In Russia everyone was fat-blaming me,” Nakhabtseva said, recalling the bullying she experienced as a child. People labeled her “fat,” “disgusting,” and a “monster.”

It’s okay to be fat in America

Nakhabtseva said that Russia has much stricter social standards when it comes to one’s appearance, including physical fitness, body shape and weight, and clothing. For example, walking into a Russian Walmart wearing simply pajamas is unheard of.

With fewer social pressures to “be skinny”, Nakhabtseva finds comfort in this element of American culture.

“It’s okay to be fat in America,” Nakhabtseva said.

Nakhabtseva has also noticed a difference between students in Russia and the U.S.

Here, everything is so strict. In Russia, nobody cares

While Russia has a very strong education system, especially in mathematics, Nakhabtseva said that students often give up by their junior or senior year of high school.

According to Nakhabtseva, high school students in Russia commonly drink, party, and skip class. Students get kicked out of schools, and the schools don’t feel restraint doing so.

“Here, everything is so strict. You are late; the office calls you. You have unexcused absences, and the office is freaking out.” Nakhabtseva said. “In Russia, nobody cares.”

Living in a Russian Economy

Nakhabtseva currently works as a waitress to support herself and her independent living. While working in the restaurant business is still a challenge because most of her salary is lost in taxes, she makes more than she ever could have in Russia.

A friend of hers works at a KFC in Russia, earning around two dollars an hour, and those wages are considered “okay money”.

Nakhabtseva described the Russian economy as “falling apart,” as many in the country face poverty and high alcoholism rates. 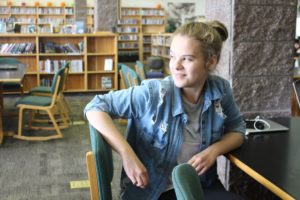 Nakhabtseva’s family in Russia was wealthy before she was born, but when she was younger, her family lost their business and a majority of their wealth. Her mother is an aquatic aerobics instructor, and her father was was irregularly employed before becoming a manager for a horse stable.

“We had a very good house, however we were poor at the same time,”  Nakhabtseva said.

Here in the U.S., Nakhabtseva said she no longer feels like a burden to her family and will be able to be more successful.

“If I was by myself, it would be extremely hard,” said Nakhabtseva, “but because I have this support that’s coming from him…it gets me through everything.”

Ria is excited for her fourth wonderful year as the Humor Page Editor a member of the Oracle staff. In her free time, she enjoys photography, doodling, and baking lemon squares. Her favorite holiday is Thanksgiving because it's the best time to test new desserts on unsuspecting family members. She also watches countless YouTube videos about the best ways to organize rooms, even though hers is a mess. If she could be Batman, she would, because he's really hecking rich.