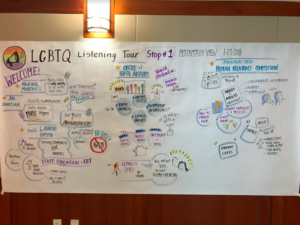 Santa Clara County is the only county in the U.S. to have an LGBTQ Affairs Office, as stated on this poster

Established in 2016, the LGBTQ Affairs Office has set goals to improve inclusivity of the LGBTQ community and successfully implemented a policy to provide LGBTQ jail inmates with gender-affirming clothing and toiletries.

“The LGBTQI Policy we’re implementing really, really is progressive, and we haven’t found anything in the entire nation that addresses the issues that we do in our protection facility,” Santa Clara County Sheriff Laurie Smith said.

Ongoing policy initiatives include providing shelter for LGBTQ homeless persons and identifying hate crimes. Overall hate crimes in the United States have declined by 30% between 1996 and 2001, but anti-LGBTQ hate crime rates have remained relatively constant.

At the forum, attendees were divided into small groups and asked to discuss ways that the county can continue to support the LGBTQ commuity.

Some attendees expressed that there should be ways to remain anonymous when sending in reports in order to actively prevent hate crimes.

Community members also advocated for an anonymous online counseling system, emphasizing the benefits it could have for queer individuals not “out” to their family or community. Attendees also recommended that county schools provide onsite counseling for LGBTQ students. 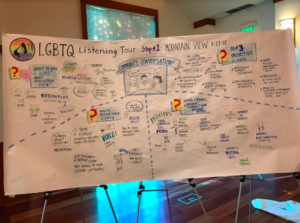 The poster outlines the “community conversation” from the forum

At the forum, people advocated for K-12 school health curricula to be inclusive of all sexualities and genders, and for elementary schools to discuss LGBTQ issues to reduce bullying. A national survey found that 81% of LGBTQ youth had been verbally harassed because of their sexual orientation, 44% had been physically harassed, and 20% had been physically assaulted, according to the LGBTQ Affairs Office website.

Founding director Maribel Martinez of the LGBTQ Affairs Office was hired to start the office two years ago. She said she realizes the importance of youth being able to speak their opinions and use their voices to enact change.

“I think young people have a tremendous amount of power through social media and the way that they can share information,” Martinez said. “We also know that young people have a powerful voice and we want to be able to encourage them in sharing that with our elected officials and with local government agencies.”

Claire is a junior at MVHS and is excited to start her second year in Oracle as internal business. In her free time, Claire enjoys eating sweets, hanging out with friends and family, and being with her cat and dog.