Thursday, April 22
You are at:Home»Sports»MVHS varsity girls soccer: keys for success in 2018 season

After a strong 2017 season ending in a CCS championship and eighth-place national ranking, the MVHS girls varsity soccer team is continuing their success into 2018. As of Feb. 5, they ranked 17th in the country, as well as second in CCS, with a 16-1 record.

Much of the Spartans’ success can be attributed to their formation. They use a 4-3-3 formation, with two wingers and a striker as the three up top, two attacking midfielders and a defensive midfielder as the three in the middle, and a flat four at the back.

“It’s a formation that gives you numbers in the middle and also numbers up top,” senior starting midfielder Bethan Parry said. “In a 4-4-2, you don’t have as much width with your forwards, so with a 4-3-3, you can play through balls a lot easier to our wingers.”

[infopopup tag=throughball] from the midfielders to the wingers are a key tactic for the Spartans and have helped them to 69 assists this season, the highest in CCS. The through balls also move the ball upfield faster and accelerate the pace of the game, giving the team more control over the game as a whole.

However, this formation can be the Spartans’ undoing.

“Our style of play is largely predicated on frequent movement off the ball. If that stops, we become too predictable, and that occurred often,” Head Coach Ivan Bandov said. 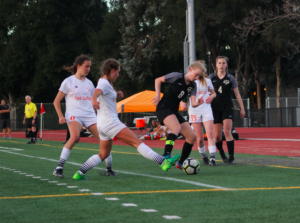 Parry (8) dribbles the ball away from Los Gatos defenders. Photo by Neda Shahiar

During the Spartans’ game against Palo Alto, Palo Alto’s 4-5-1 formation restricted movement in the midfield for the Spartans, disallowing the team from getting open for passes and moving the ball upfield and into the attack.

In the second half, however, the Spartans switched to a 3-5-2 formation, enabling them to combat Palo Alto’s midfield and push more players upfield. The result of this was an improved second half in which they were able to get one goal back on a through ball to senior Laura Carceroni and nearly tie the game, according to Parry.

Defensively, Mountain View is one of the best teams in CCS, allowing just 10 goals in 15 games. Much of this is due to their aggressive defense that catches opposing offenses off guard and allows the team to win the ball back quickly.

The strength of the Spartan defense stems from the skill of their starting four defenders.

“We’re pretty aggressive on defense because all four of our defenders are very skilled so we know we can cover each other,” said senior and starting center back Elena Palacios. “This allows the rest of the team to press very high up the field.”

We like to press high up the field whenever possible. I think it’s important to make opposing players on the ball uncomfortable, which leads to more mistakes

The left and right backs also push forward offensively and pressure the opposing defense, allowing Mountain View to outnumber the opposing defense and open more options on the attack. Moreover, the attacking midfielder, wing back, and winger can form triangles in the midfield and push the ball forward with greater efficiency.

One of the most important components of the team is junior center defensive midfielder Sydney Arrillaga.

As a defensive midfielder, Arrillaga’s role differs from those of the other midfielders. According to Arrillaga, she pushes the ball upfield when in possession on offense and can the ball to the other side of the field in order to restart the attack.

Defensively, she serves as the last line between the offense and the defense, preventing opponents’ attacks with preemptive pressure.“[Arrillaga] reads the game well, a terrific ball winner, and is able to make key passes to help start our attack,” Bandov said. “For me, this position is the unsung hero of a team. Without a strong [center defensive midfielder], a team cannot function properly on the field.”

The Spartans have four games left in the season, including a rematch against Palo Alto on Feb. 14, as they make their final push for CCS.

“It’s a must-win game for us if we want to win league [championships]. We’re going to come out very motivated and play hard for the whole game,” Parry said.