After years of resilience and hard work, 10 MVHS student athletes were recognized for their dedication and excellence at the school’s celebration on National Signing Day on Feb. 7. 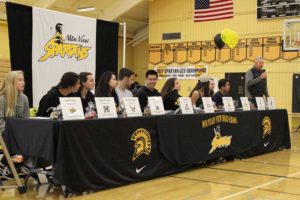 At a ceremony hosted in the large gym, the athletes joined the nation in signing their National Letters of Intent and committed to playing collegiate athletics, signifying the end of the recruiting process and a new chapter in the lives of the athletes.

“My experience at signing day gave me butterflies,” Tang said. “To see all your supporters watching you and showing how happy they are for you is such a great feeling, especially knowing that without those supporters, nothing would’ve been made possible.”

I don’t want to set my hopes too high, but you need to dream big

Although excited, all four noted that they expect challenges in keeping up with the strength, size and experience of the older girls, but are dedicated and will be pushing themselves to improve their skills. 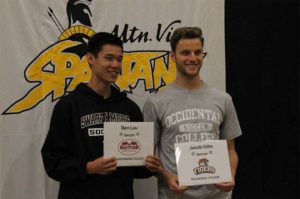 Lau and Gitin will continue their soccer careers at Division III schools. Photo by Neda Shahiar

“National Signing Day is an exciting moment in an athlete’s career, because it marks the end of the recruiting journey,” Gitin said. “This is a big moment for me and the other athletes, and we were happy to be able to share it with our friends and family at the event.”

Lau added that the change from high school soccer to NCAA soccer will be very difficult, but both said that they are excited and ready for the challenge.

Although NCAA sports are an entirely new level of competition, the athletes say that they are ready to commit to playing.

“Signing a National Letter of Intent can be daunting — it’s a flimsy piece of paper that comes with a lot of obligation,” Joffe said. “However, I think most athletes who sign with a college team have been considering and planning this moment for years, so they know what they’re getting into.” 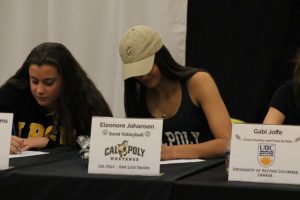 For athletes like Eleonore Johansen, however, the decision to play sand volleyball comes with another layer of dedication and commitment that lies within the difficulty of building a new sports program.

“I am very excited because beach volleyball is a very new sport. It’s been two or three years that it’s been a collegiate sport, so I’m really happy that I get to be a part of a college program, grow the sport, and hopefully play professionally afterwards,” Johansen said.

Although some of the recruited athletes do not intend on playing their sport past the collegiate level, Johansen, Matafora, and Lau said they hope to one day play professionally.

“I don’t want to set my hopes too high, but you need to dream big,” Johansen said.