MVHS cheerleading once again proved that they are one of the top teams of the West Coast, returning to Mountain View as two time victors of the California Royalty Championship, an open competition between school, recreational, and all-star cheer and dance teams.

Coming into the competition, the team had a smaller squad than usual, consisting of just nine members. But, even though the size of their team changed, their expectations remained just as high.

“Of course our goal was to win,” senior Grant Jones said. “That was our main goal coming in, but we also wanted to score above a 90, and we scored a 93.” 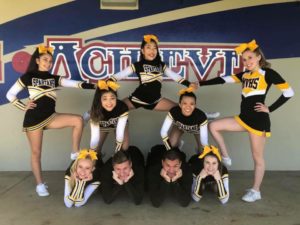 Members of the team also noted that because of the smaller team, they were able to push themselves to perform new stunts that they would not be able to accomplish with a larger team.

The team was forced to learn a lot of new skills in order to perform their new stunts, making them a little uneasy coming into the competition.

“We were all a little nervous for this competition because, to be honest, we weren’t very prepared,” senior Kara Joves said. “But when we saw our score, we felt a wave of excitement. We just felt so happy and proud of ourselves and happy with how far we’d come.”

Many of the younger members were especially uneasy, as they had never competed in such a large competition before. However, Jimenez noted that the three senior members of the team, who were all a part of the championship winning team the previous year, took initiative to help relax them before performing.

“With the freshmen, we just hype them up and tell them to do everything right and remind them of how long we’ve been practicing,” Jimenez said. “We remind them that it’ll all be worth it in the end.”

The team also ascribed much of their success to their coaches, Ryan Roa and CC Cordero, noting that their experience and style of coaching helped push the team to success.

The cheer team won exclusive tiaras due to their win. Photo courtesy of Kara Joves.

“We have very strict coaches,” Jimenez said. “They’re just so passionate about doing cheer, that’s what makes them great.”

Although a large portion of the team will be graduating this year, Jones said he is confident that the future teams will find success.

“They’re going to do well. They’re already learning quite a bit and they’ll get past the barriers,” Jones said.