Sunday, May 16
You are at:Home»News»Students support teacher Victor Valdez with online petition

MVHS sophomore Joey Baril and his classmates started an online petition on April 4 in response to news that teacher and counselor Victor Valdez would not be returning to MVHS for the 2018-2019 school year.

“We were just walking in [to class],” Baril said.“He told us and we were all really upset because he’s a really important person to us.“

Over 350 people and counting have signed the petition directed toward school administration, which states that “signing this petition will show that you don’t agree with the schools decision to let him go and that you support the help of underprivileged students finding their path in life.”

Isabel Gibson comments her reason for signing the petition.

For the last two years, Valdez has taught Supervised Study, a class that aims to help academically struggling students by providing daily intervention and structured work time; he also offers counseling to his students.

Valdez said the district notified him in early March that he would not receive tenure and would not be rehired for the 2018-2019 school year. The district did not provide Valdez with the reasoning behind this decision, and are not required to do so.

When Valdez explained to the class that he would not be returning next year, one student casually suggested starting a petition. The idea caught on, and Baril started the petition, hoping to “make him [Valdez] be able to come back next year and show him that people actually care.”

“Before I went to his class, I wasn’t really thinking about college or anything. I was getting below a 2.0,” Baril said. “Now my grades are way higher and I’m actually thinking about my future. If not for him, I’d probably be living on the streets.”

Lisset Tellez Martinez comments her reason for signing the petition.

Several students chose to sign the petition, saying that he built strong connections with his students and helped them through personal and academic struggles.

“He gets personal with students and he cares about them. He’s helped a lot of them succeed and he’s talked about their futures,” junior Samantha Avalos said.

Junior Jason Broyles described how he felt comfortable opening up to Valdez, unlike with other teachers on campus.

“If Victor wasn’t here next year, I don’t know who else I’d go to talk to,” Broyles said. “When I talk to Victor it feels so nice and inviting and welcoming, and I don’t think there’s any other teacher on campus that I feel comfortable with.” 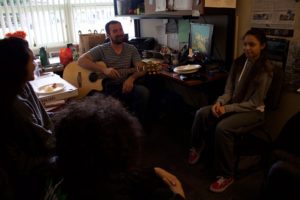 Valdez’s students often spend their free time in his counseling office to socialize and eat lunch together. Senior Khoi Tran said that he spends every zero period in Valdez’s counseling office, and junior Carlos Meza regularly visits Valdez to practice the guitar.

“He really dedicates a lot of time to the students,” Meza said.

Valdez said the district gave him the option to resign instead of being let go, which he said he chose to do to improve prospects of finding a new job.

“I would say it felt everything was smooth, and it felt like I was building a really good rapport with the students,” Valdez said of his time teaching at MVHS.

An email from MVLA communications manager Cynthia Greaves confirmed that Valdez resigned from his position last month, but did not mention the district’s decision to withhold from rehiring him. In addition, Greaves said that the Supervised Study class will continue to be be offered in the next school year.

“MVHS is actively recruiting a replacement for this role and there will be no reduction in counseling services to his students,” Greaves said in the email.

As the Supervised Study instructor, Valdez teaches about 50 students over four class periods. He said he employed a holistic approach in working with his students, going beyond the original purpose of the class as a work period.

Ashley Singleton comments her reason for signing the petition.

Valdez has previous experience as a counselor working with teenagers in drug rehabilitation and mental health programs. This was also his fifth year as a school counselor.