The Black Student Union Instagram account raised concerns Sunday that photos shared by members of a school choir traveling in South Africa were racially insensitive. The subsequent social media controversy resulted in intervention from school administration, and parties involved are looking to hold a “restorative discussion” when the choir group, the Madrigals, return from their trip, according to several administrators and BSU president Mia Lawrence.

African people are not exhibits and their houses are not museums

The Madrigals, the school’s advanced choir, annually travel on an international tour for choral performances and opportunities to experience other cultures. This year’s tour took place in South Africa, and after a visit to a Zulu village, Madrigal members on tour posted photos of themselves alongside African children to their private Instagram accounts.

Lawrence, who runs the BSU Instagram account, made two posts on April 15 describing the photos as “ridiculously inappropriate” and “impersonal.” The first included screenshots of posts by Madrigals members, and the second reposted a photo from another Instagram account, depicting a white Barbie surrounded by black children while in Africa. The account the second photo was taken from an account that posts pictures of Barbie photoshopped in Africa to satirize white people going on service trips.

Lawrence posted on the account after several BSU members brought the Madrigals’ posts to her attention and asked her to make a statement, she said. Lawrence said that the photos reflected a “white savior” attitude from the choir students, who she said she felt used the African children as “toys to be shown off.”

“African people are not exhibits and their houses are not museums,” Lawrence said in the caption of the BSU’s initial post.

Lawrence added that the photo captions on the Madrigals’ posts provided no explanation regarding the circumstance the photos were taken in and did not state the names of the children or their relationship with them.

“Even if people didn’t agree [with us], it was okay because we wanted to start a dialogue,” Lawrence said, adding that she and two other BSU members continued to respond to comments on the post throughout the night. 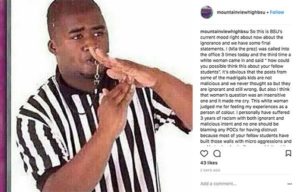 Lawrence replaced the deleted posts with a statement about her interaction with administration. Screenshot from @mountainviewhighbsu Instagram.

Lawrence deleted both posts following several requests from administration to remove the photos with Madrigal students in them. She then replaced them with another post describing her interaction with the administration and district office.

In an email statement to the Oracle, choir director Jill Denny expressed her perspective of the circumstances in which the pictures were taken.

“We posted pictures of the people we connected with and had interactions with, out of deep affection. The students have done nothing wrong by posting,” Denny said in the email. “Some of those posts were misinterpreted by people who bring different life experiences to the viewing of the posts. It is important we try to understand those perspectives.”

Some users who commented on BSU’s posts said they agreed that the Madrigals’ photos seemed racially insensitive.

“My personal opinion is that the Madrigals shouldn’t have taken the photos, specifically the photos of them posing with children — African children,” junior Samantha Evans said. “They certainly shouldn’t have posted them on social media because it’s a very sensitive situation.”

I knew the intent was not to hurt anyone’s feelings and that they were just enjoying the trip, but I could see how they could have put a little more work into humanizing their posts

Evans, a member of choir, traveled to Costa Rica over February break for A Capella’s annual tour. She said that although they visited schools and interacted with locals, all of the photos candidly depicted students interacting with children rather than posing, and none of the photos were posted to social media.

Junior Michael Love said the photos and captions from Madrigal students seemed “a lot more like ignorance than hate.”

“I knew the intent was not to hurt anyone’s feelings and that they were just enjoying the trip, but I could see how they could have put a little more work into humanizing their posts,” Love said.

“I’m a Madrigal alumni and I can 100% assure you that what the current madrigals [sic]are doing is completely harmless,” one commenter wrote. “The whole point of going on tours is to embrace the culture of the various countries that we go to and make friends who share a love of music with us.”

“We did not take these photos because we are here to ‘save’ people,” Torres said. “We as a group have spent hours upon hours in preparation for this trip, sending videos to locals and getting feedback on our pronunciation, dance moves, etc. in order to make sure we were being culturally sensitive and not at all offensive.”

Principal David Grissom said that he personally did not recognize anything alarming about the Madrigals’ posts, but conceded that his lens is “not the lens of an African American who is going to have a different viewpoint.”

The district and school administration initiated three meetings with Lawrence April 16 during which they requested that BSU’s first post be taken down, as it publicly shared photos that were initially posted to private accounts. Administration raised concerns that BSU’s post could infringe upon the original posters’ right to privacy.

According to Lawrence, a parent of one of the Madrigals whose picture was used in BSU’s first post requested that Lawrence remove the post and threatened to involve a lawyer if action was not taken immediately.

While Grissom said he was unsure of the school’s exact rights to intervene with BSU’s post, he said that any student situation with a distinct connection to the school allows the district to intervene. BSU’s Instagram page uses the handle “@mountainviewhighbsu,” which Grissom said affiliates the account with the school.

Some of those posts were misinterpreted by people who bring different life experiences to the viewing of the posts. It is important we try to understand those perspectives

Assistant Principal Carmen Gomez acknowledged students’ free speech rights, but said that administration made the request primarily to preserve the “social and emotional safety for these students.” District communications manager Cynthia Greaves added that the use of social media to respond to the Madrigals’ posts could have crossed a “potential line into cyberbullying.”

Lawrence, Love, and Evans said that they didn’t agree with administration’s push to delete the post. Evans felt that deleting the post removed the “insightful conversations about race that took place in the comment section.”

Administration plans to host a discussion for members of BSU and the Madrigals to engage in a dialogue about race and the current controversy. The Madrigals are slated to return from their trip Thursday, April 19.

“Social media is a good place for exclamation, but tricky for presenting the big picture. It often leads to hurt feelings instead of caring exchange,” Denny said in the email, adding that the discussions will allow for the involved groups to “gain true understanding.”