Following their 4-0 loss to Los Gatos two days prior on April 18, the MVHS varsity baseball team faced the Wildcats again on Friday, April 20. Although their win the day before against Monta Vista may have helped to boost their confidence, the team fell short to Los Gatos again, losing 4-2.

After a quick let down in the first inning with Los Gatos scoring two runs, Mountain View came back in the second inning, with a run scored by sophomore Tristan Silveira, followed by Sam Gil scoring in the fifth. However, this wasn’t enough to prevent Los Gatos from taking the win, as the Wildcats later scored two more runs in the fifth and seventh innings. 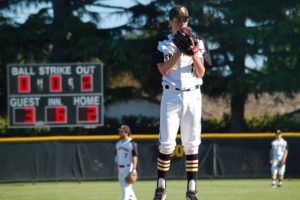 Jared Norris (11) prepares to throw a pitch at the top of the 6th. Photo by Julia Wagner.

Despite the loss, head coach Kris Mims said he was overall happy with the team’s performance and is optimistic for the remainder of the season.

”We battle, we compete, and I honestly expect us, when the season’s over, to be between the third and fifth place in our league, which will get us to CCS,” Mims said

Josh Greenebaum, a senior who has been playing on the varsity team since the end of his sophomore year, saw Friday’s game as one of their better games this season.

“If we play like we did this game, we will win most of the rest of our games,” Greenebaum said. “We played a good team and some things just didn’t go our way. Overall, if we can play like this at a consistent level, then we’ll be a dangerous team going into CCS.”

With two freshmen and three sophomores on the team, the players are still adjusting to one another and learning how to work well together. 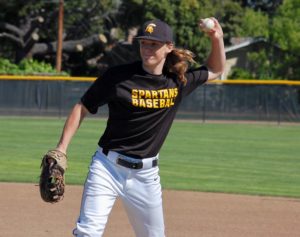 Sophomore and outfielder Cae Cox is one of the three sophomores on the varsity baseball team. Photo by Julia Wagner

Tristan Silveria, a sophomore who joined the varsity team as a freshman, thinks that the team can improve their overall unity.

“We are lacking the team chemistry that we need to improve from a good team to a great team,” Silveria said. “I would like to see us work more as a team and have more confidence in everyone in the future.”

Aidan Patterson, a senior who has been on the varsity team since sophomore year, has similar hopes for the team.

“In order to win more games, we need more people willing to play for the success of the team and not for themselves,” Patterson said.

The Spartans are slated to play against Woodside on Monday, April 23 at 4 p.m. at MVHS.

Claire is a junior at MVHS and is excited to start her second year in Oracle as internal business. In her free time, Claire enjoys eating sweets, hanging out with friends and family, and being with her cat and dog.