Sunday, April 18
You are at:Home»Sports»MVHS softball looks to build off of late season success in CCS

After a strong regular season that finished with a 10-2 league record and a second place standing, the MVHS girls softball team looks to continue their success in the CCS playoffs.

Although the Spartans started the season slow, winning just two of their first four games, the team pulled themselves back on track and finished the season strong, winning eight of their final 12 games, spearheaded by their strong defense. 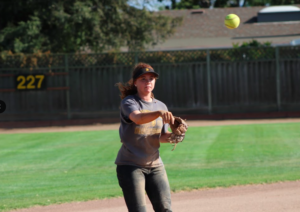 “Our defense is our biggest strength,” senior and captain Rachel Klemm said. “Throughout the season, our defense has always won games for us.”

According to Maxpreps, the Spartans have allowed just 38 runs through their 12 league games, the third lowest total in the De Anza League.

Additionally, the team’s hitting has been an area in which the team has improved the most and is a potential deciding factor in their CCS playoffs.

“Earlier in the season we definitely had difficulty scoring runs and getting runs up on the board. Our hitting just wasn’t clicking,” senior and captain Rani Lauwers said. “But as the season went on, we definitely started to improve and everyone started to fall into rhythm. Bringing the hitting that we’ve had as a group towards the end of the season into CCS is really going to help us.” 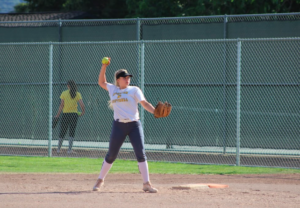 First baseman, senior and captain Rachel Klemm throws the ball back in after a play. Photo by Neda Shahiar.

One of the most important pieces of the Spartans softball team is first year head coach Xavier Cook, who has inspired the team to push towards a CCS championship.

“The coach has really put it in our heads that we can go far this year,” Klemm said.“Ever since day 1, he’s been saying that this team is one of the best that he’s ever coached and that all we need to do is believe it too.”

Additionally, both captains expressed that one of the biggest strengths of this year’s team is the bond between all of the members of the team. Because many of the girls have played together for numerous years in the same league outside of school, they have been able to create a unique bond that shows on the field. 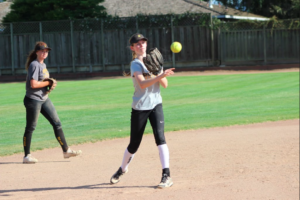 “Having that bond and sense of comradery and team spirit on the team, it allows you to go into each game and go all out because everyone is thinking the same way and feeling the same way as you,” Lauwers said. “It means that we can put 110% into everything we do and know that our teammates are going to give us the same thing back.”

The Spartans have the third-seed in the CCS tournament and are slated to play 14th-seeded Presentation High School at MVHS on Wednesday, May 16th at 4:00 PM.